When Siblings Are Friends: The Sibling Effect

In her New York Times Ties article, “When Friends Are ‘Like Family'”, Deborah Tannen explores friendship for a book in progress.

As the author of The Sibling Connection: How Siblings Shape Our Lives, I read Tannen’s piece with great interest.  I guess you might say that I’m a sibophile (I just made that up.  You won’t find it in the dictionary.)  I believe in the sibling relationship with all of its twists and turns and the many ways siblings help us understand why, how, and the way we are .

Of course, it’s not an either/or between siblings and friends.  Tannen points out that comments by the people she interviewed “shed light on the nature of friendship, the nature of family, and something that lies at the heart of both: what it means to be close.”

We all have friends who are “like family.”  Eighty per cent of us have at least one sibling.  Both relationships can be loving, supportive, fun.  But unlike friends, our siblings are the only ones who go all the way back and can help us understand where we came from and where we’ve gone.

A woman in my yoga class announced that she and her husband are moving to Walnut Creek, California, where they’ve purchased a condo in a 55+ active adult community.  Her son, daughter-in-law, and 8-month-old grandchild live nearby, and she wants to be part of her grandchild’s life. Who can blame her?  They opted for the active adult community, hoping to make friends more easily than they would in a “mixed” neighborhood.

Well, my husband and I live in one of those “mixed” neighborhoods where we are now old fogeys surrounded by young families and their kids. For me, the real plus in a 55+ active adult community is a permanent escape from those screaming, snotty, self-absorbed children.  I’m particularly blessed that, among all those brats, a dozen boys under 14 live within a baseball’s throw from our home.  I’m guessing that their stay-at-home moms don’t want to accompany them to the well-equipped park a half block away.  It’s too much trouble.  Instead, they are happy to have their children play their games on their front lawns and the lawns of their neighbors, including ours.  It doesn’t matter that these hellions trample the grass, fall into flower beds, and occasionally bring a car to a screeching halt as one of them runs into the street to retrieve an errant soccer ball.  No, this is their turf and everyone else be damned.

Last year, two of the boys climbed our blooming, fragile crab apple tree to snatch a poorly thrown frisbee.  My husband opened the front door and called them stupid.  He’d barely turned the latch when the boys’ irrate mother stomped up our front stairs.  In full attack mode with a red face and clenched fists, she demanded to know how my husband deigned to call her boys stupid?  “If you have something to say about my children, you say it to me first.”

Ever the peacemaker, I tried to extinguish the fire.  Well, at least to tamp it down.

“Perhaps my husband’s choice of words was a bit too strong,” I said.  “But you didn’t expect that he’d leave the boys to rummage through our tree while he ran two doors down to talk to you?”

Her face was as red and burning as the fire I’d attempted to douse.

“Well,” she puttered, “I guess not.  But you didn’t have to call them stupid.”

“But they are,” my husband muttered so softly that only I could hear. 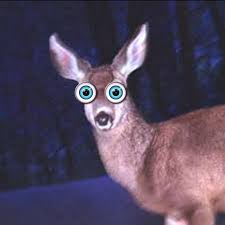 THE MOTHER turned and, looking like a deer caught in the headlights, scampered down the stairs and across our lawn.

And then there’s the professional trampoline in the same mother’s yard.  This time it’s in the back yard conveniently located for us to view from our bedroom south-facing windows.  I guess I wouldn’t mind the bodies bouncing up and down.  It’s the noise—the thunderous squeals and shouting that can last for hours at a stretch.

I’ve plotted the ruin of that trampoline.  But I’d have to cover my tracks.  Donning gloves and plastic booties, I’d sneak into the back yard in the deep of night and burn the sucker.  Or I’d wield one of those butcher knives and slash the thing beyond recognition.  Just the other day, I concocted another scheme:  I’d ask THE MOTHER if the trampoline would be moving with the family after their new home on the other side of town (Thank you, Lord!) was move-in ready.  (Yep, they are moving.  But not until Xmas which means a whole summer to go.)  If THE MOTHER said “No,” I’d tell her that friends with young children might like to buy it.  At this point, I’d put out the money and have the thing taken to the city dump.

I love our 1864 vintage home.  But, right now, the lure of one of those 55+ active adult communities is mighty tempting.