One of my favorite TV shows, “Sunday Morning” now with Jane Pauley at the helm, aired “Remembering Pearl Harbor” on Sunday.

The Japanese attack on December 7th,1941, sparked the defiant battle cry: “REMEMBER PEARL HARBOR.” And even 75 years later, the dwindling ranks of those who watched the attack happen remember it still.

It was the “dwindling ranks” comment that got me going: tears in between eating my morning fried egg over easy and a piece of 7 Grain toast smeared with coconut oil.  It’s highly doubtful that my dad, who would have turned 100 this May, would have been around for the commemoration of this momentous naval slaughter that ultimately turned our isolationist country into a global world power.  My dad was a World War II vet: he didn’t see action in the Pacific but “over” Italy where he co-piloted a B24 toward the end of the war.  Still, when he was alive, I would pick up the phone on Pearl Harbor Day—to talk, to hear him reminisce about his time in the Army Air Corps, the precursor to today’s Air Force.

It was those stories and the ones my mother told of her days on the road as a World War II traveling wife that captivated me and, ultimately, led to my book, Thanks For The Memories: Love, Sex, and World War II. 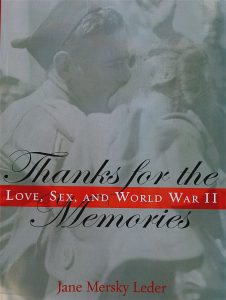 In 2006, I flew to Sarasota where my parents lived for a book signing at their favorite bookstore.  My mother had called everyone she knew within a 25-mile radios.  Shame on any invitees who did not attend:  friends; relatives; or staff at the Sarasota Bay Club, the spa where she had her nails done weekly, the hair salon where her long-time stylist cut her hair. I stood in front of a packed room of maybe 100 people, talked about my experiences writing the book and read parts of several chapters.  My mother beamed as if her daughter had won the Pulitzer; my dad appeared moved by the whole deal and kept a low profile, his head down for most of the event.

I sold a lot of books that day.  Again, if an attendee walked out of the bookstore without a signed copy, I’m certain my mother never spoke to her again.  She was like that.  Very loyal with an elephant’s memory that never forgot what she perceived as a slight.

Today, as I sat watching the segment on “Sunday Morning,” the first-hand accounts of two survivors of the Pearl Harbor attack reaffirmed their commitment to keeping the history alive as long as they are still ticking in the face of the march of time.

Every day, memories of World War II—its sights and sounds, its terrors and triumphs—disappear. Yielding to the inalterable process of aging, the men and women who fought and won the great conflict are now in their late 80s and 90s. They are dying quickly—according to US Department of Veterans Affairs statistics, only 620,000 of the 16 million Americans who served in World War II were alive in 2016. (The National World War II Museum)

A native Hawaiian who was a little girl during the attack voiced her pessimism.  Most young people who visit Pearl Harbor today, she said, don’t have a clue as to what happened there, let alone what country attacked the United States.

The men and women of the “Greatest Generation” were ordinary people who lived extraordinary lives.  At a time when we have an all-volunteer military with a handful of Americans fighting and protecting the U.S., how would young people respond if they were drafted to go to war—their only way out; psychological discharge, flat feet, a broken back, or a Tweet from Mr. Trump?  Would young married women hit the road, crisscrossing the country, to live in dusty, no-count towns for two months a shot before moving on, just for the chance to spend a little time with their husbands?  Would today’s young women, like 18 million women during the war, either go back to work or to work for the first time or join the military where they could not fight but volunteered as nurses, administrators, secretaries for the big brass?

I wouldn’t bet on it

To hear my parents’ voices and some of their experiences during World War II, I listen to the following segment on National Public Radio’s “Day To Day,” recorded on December 7, 2006.  The segment helps keep me connected to them and to the “Day of Infamy” which is, according to many historians, the most important day in American history.