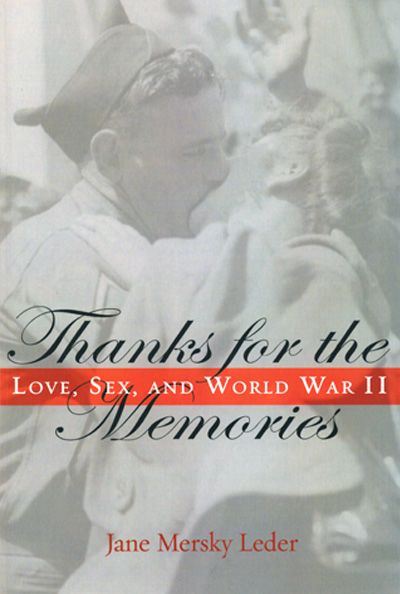 Thanks for the Memories: Love, Sex, and World War II is the true story of how a generation responded to the fervor of war and how those passions changed lives – and relationships between the sexes – forever.

Praise for Thanks for the Memories

“Jane Mersky Leder recounts the stories of ordinary people in extraordinary times, and brings the World War II era to life. Beautifully written and poignant, sometimes romantic but not always, Thanks For The Memories recounts how men and women during World War II sought love, sex and security in the midst of the upheavals of wartime.” –William H. Chafe, The Alice Mary Baldwin Professor of History at Duke University

“ . . . Vividly portrays the disruptive impact of World War II on relations between men and women, not only on the well documented arena of labor force participation but also in the realms of sex, love, and marriage. . . . Leder makes a persuasive case that the women’s movement in the late 1960s was an aftershock of these seismic shifts whose story, until now, has not been told.” –Elaine Tyler May, Professor of American Studies and History, Director of Graduate Studies, American Studies Department University of Minnesota

“Lively, moving, evocative and memorable, Thanks For The Memories brings back to us the extraordinary changes that occurred among women and men during World War II, and re-creates for us their pain, joy and courage.” –Sara M. Evans, Ph.D., Author of Born for Liberty: A History of Women America

To purchase this book click on the icons below