I’ve earned the right to say whatever I want . . . well, almost.  As a friend said recently, “You’ve made it to 70 and should embrace your age and good fortune.”

Okay.  I’ll take her congrats at face value and “tell it like it is.”

Example:  A few nights ago in my contemporary dance class, a new song had been added to the prescribed routines.  I can’t the remember the name of the female singer and don’t care to.  She sounded like a sap singing an even sappier song about love or getting in touch with her inner self or some such mushy crap.

But it seems my opinion was not that of the rest of the women in the class.

I would have clicked the remote and changed the channel.  Like immediately . . .

“You know,” said a third woman.  “Last week was my birthday, and the song just hit me in my heart.  It meant so much to me.”

I wanted to barf.

We all danced over to the barre where we would perform a few minutes’ worth of isometrics using rubber exercise bands.

Before the music started and we did our first squat, I felt a surge of honesty coursing through my veins and, yes, a few twinges in my knees.  It was if I were menopausal all over again.  Only this time around, I wasn’t a screaming banshee standing in my neighbor’s yard, threatening to call the cops if the yokels two houses down didn’t remove their stereo from the roof of their garage immediately.

No, this time, I followed proper etiquette and, in a soft, soothing voice said, “I’m amazed at how taste is so subjective.   I hate that song.”

The other dancers turned in my direction with eyes wide open, mouths agape.  They looked like I’d just killed their first borns.

I, on the other hand, felt as if I’d just slayed Goliath with a turn of a phrase.

No one looked at me again during the remainder of the class.   Let them listen to she- who- shall- remain nameless.  I’d plug in to Amy Winehouse or an Adele classic or maybe some Bob Marley.

After, when all the others had left for what I assumed were their Sunday afternoon trips to the zoo, I looked at the teacher and my friend and said, “Gee, I hope they’ll get over it.”

She started to laugh.  “I knew you wouldn’t like the song.”

She hasn’t played the song since.

And I haven’t stopped smiling. 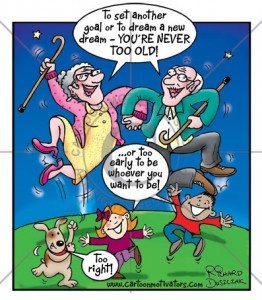