Social media allows so many of us to share information, communicate with “lost” friends and family members, to accelerate research on every subject under the sun.

But it also has its downsides, one of which is bullying.  According to statistics reported by ABC News, nearly 30 percent of students are either bullies or victims of bullying, and 160,000 kids stay home from school every day because of fear of bullying.

It’s not unusual for a post to include, say, a picture from the Internet of a female’s private parts and put the victim’s name on the photo.  That is exactly what happened to a 14-year-old girl in Warrenton, Missouri.  Her parents complained to the school administration but, after repeated demeaning posts, the teen took her own life.

One might think that this is an extreme case, but, all too often, an adolescent coping with a myriad of changes, cannot absorb the hurt caused by cyber bullying.  It is not unusual either for a group of girls to bully out of jealousy of a fellow student who is popular and academically successful.

Almost every day, we read about a teen who kills herself because of bullying.  Bullied victims are 7 to 9 per cent more likely to consider suicide according to a study by Yale University.  Studies in Britain have found half of the of suicides among youth related to bullying.

In my ebook, Dead Serious, I regretfully did not include a chapter on the connection between bullying and suicide.  When I wrote the first edition of the book (Dead Serious: A Book for Teenagers About Teenage Suicide) in 1991, there was no social media to speak of.  Facebook, for example, didn’t launch until 2004.  However, the second edition of the book should have taken bullying into account.  I hope to make up some of the ground here.

DO YOU HAVE TO BE AN EXPERT TO WRITE A SELF-HELP BOOK?

Not that long ago, a woman I’d just met but who was aware of my book about brothers and sisters, dove in with all kinds of questions.  She has only one sister, and the two have not exchanged more than a few words at a time for many years.

“You wrote the sibling book,” she said.  “What can I do to reconnect with my sister?  She’s my only sibling.  Once my mother dies, I’ll have no one.”

I have a sister, thank you, and am not in the market for another.

She put her arm around me and leaned in close.

Hey, I’m an author, not a therapist and not a god damn surrogate sister.

That didn’t stop me, however, from offering some advice.  I wanted to help.  Isn’t that what the author of self-help books hopes to do?

Well, okay, but she’d better know of what she writes.  According to a January 8, 2008, article in the Monitor of Psycholgy, a publication of the American Psychological Association, there are 2,000-plus self-help tomes published every year.  “Many may be useless yet essentially benign,” says John C. Norcross, PhD, “but some can carry harmful messages.”

The expert readers of my book with all kinds of letters behind their names praised it as, among things, “wise,” “disciplined,” and “informed by the best available knowledge and speculation of social scientists and clinicians.”

So, what was my problem?  I’d passed muster—gotten the gold stamp of approval—but felt bereft of any good advice to offer to this distraught woman who wanted her sister back.  (And if that didn’t work, she’d take me instead.)

I asked a few questions and got more than I’d bargained for:  The sisters’ father had left the family before the girls started kindergarten.  Their mother who’d married when she was 17 was still a young girl herself and needed as much mothering as the girls, if not more.  She was, according to the 72-year-old sibling I’d just met, inappropriate (as in making “plays” for her boyfriends) and flitted from one sexual liaison to the next.  The sisters waited four years before their mother served them a hot meal.

Conventional wisdom would have it that two sisters who had such a disastrous childhood and were, at that time, each other’s support, would stick together and remain close into adulthood.  No one else could understand their struggles to survive and thrive.

I asked more questions:  Is your sister married?  (No, but she’s been with the same man for many years.  He is the father of their two children.)  What does she do professionally? (She teaches creative writing at a prestigious midwestern university.  Ironically, the “other” sister is also a writer, as well as a visual artist.)

The more information I gleaned, the less competent I felt.  How had I gotten myself into this position?  Why the hell did I write the book?  I should have blogged or written a journal.  (There was no such thing as blogging in 1991.)  Or I should have printed the poems I wrote in first grade.

But I was cornered.  I had an emotionally damaged woman who wanted her sister back, and it felt as if I were the only person on the planet who could offer a few suggestions.

I may have uttered a bit of psychobabble after that but, if I what I’d said was minimally benign and optimally helpful, I could walk away with confidence that my next book would never fall into the self-help category.

When I was growing up, we were anything but politically correct, or PC.  Blacks were too often called “niggers.” We referred to  undocumented immigrants as “illegal aliens.”  (A lot of people still do.)  The phrase “That’s gay” was bandied about to mean “stupid” or “dumb.”  And people with disabilities were labeled “retarded.”

The designation retarded morphed into handicapped and now into the politically correct intellectual or physical disability.

Growing up with a sibling who has a physical or intellectual disability has both bright and bleak moments.  The healthy brother or sister may, at times, feel tremendous satisfaction at the smallest accomplishments of her disabled sibling.  At another time, the same child may feel bitter and resentful because of the extra attention given to the disabled sibling or because of the care taking demands.

My friend Jenny’s sister had cerebral palsy.  Harriet could neither stand up, walk or talk.

Harriet was totally unspoiled.  She was not just a vegetable, even though it sounds like she was.  My sister was everything that was good.

Somehow Jenny didn’t feel burdened by taking care of Harriet.  “She needed me.”

But she admitted that when she was a teenager, she was a little embarrassed about Harriet.  There were some physical things like her drooling and her irregular breathing that she just didn’t want to explain.  It kept her from having friends over to her house.  But she got over it.

The fact that I grew up with a sister like this from day one made a difference.  It was natural for me.  Sure, we had to explain to new people that she had cerebral palsy.  But it wasn’t something our family dwelled on.

For Jenny, growing up with an intellectually and physically disabled sister made her a more compassionate person who tries to look beyond people’s faults.  She probably became a teacher because of Harriet.  “It helped me a lot in my relationships with children.”

ADULT SIBLINGS OF A DISABLED BROTHER OR SISTER

As parents age and can no longer take care of their disabled child, brothers and sisters are faced with juggling their own lives and the increased responsibilities of taking care of or making decisions for outside care.  This transition can strain the sibling bond or reinforce it.

I had the chance to speak to several parents who were middle aged  but had made the decision to enroll their disabled children (most of them adults themselves) in live-in campuses like Misericordia in Chicago.

Jeri’s son Henry is a young man with Down Syndrome.  While he attended public schools, Henry requires assistance to complete basic tasks like tying his shoes and washing his hair.  His reading skills are limited; he can’t tell time.  “There was no way he could live independently,” Jeri said.  “Finding a campus like Misericordia was a no brainer.  I knew Henry would be happier with people his own age and that his two younger brothers wouldn’t have to worry about his care when I am gone.”

Henry’s two younger brothers, now both in their 20s, won’t have to worry about full-time care and possible financial burdens.  They love their brother, see him often on home visits and cherish what they hope will be a life-long connection.

Still, there are adult siblings who will face a more challenging situation.  For a variety of reasons both financial and emotional, their parents have not planned ahead for their disabled child’s care.  One mother I interviewed said, “Why would I send her away?  No one can love and take care of her like I can.”  A woman in her mid-60s, this mother doesn’t appear to have considered her daughter’s care once she is unable to meet the responsibilities.  And there has been little discussion with her other adult children about who will take their sister into their home or make the touch decisions about other options.

“It’s easy to push all of this under the rug,” said one of the siblings, 45.  “But my mother isn’t getting any younger.  I don’t know how much longer she can manage full-time care.”

All the siblings with a disabled brother or sister whom I interviewed for my book, The Sibling Connection: How Siblings Shape Our Lives, realize that their disabled sibling has enriched their lives more than they could have imagined.  Yes, there are unique challenges, but none of the younger or adult siblings said they’d change a thing. 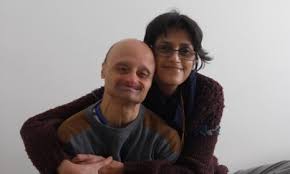