I don’t know about you, but we chanted that cheer at every high school basketball, baseball, football game.  (I don’t remember if the girls’ team even had much of a fan base, let alone cheers.  Most of the cheerleaders were also the jocks, so the pickings were slim.)

Right now, I want to stand up and fight.  Two nights ago, my neighbor hosted a Meet and Greet for NARAL, Pro Choice America.  (If you’re a woman [or man] and don’t give a damn about a woman’s right to choose, then you can peel off now.  Or maybe it makes sense to read on and consider changing your mind, even getting involved.)

Seven in ten Americans believe that abortion should be legal.  But Trump’s nominee to fill the vacancy on the Supreme Court, Judge Brett Kavenaugh, has ruled on one abortion case that indicates that Roe v Wade (1973), the landmark decision issued in 1973 by the United States Supreme Court on the issue of the constitutionality of laws that criminalized or restricted access to abortions, may be overturned.

I’m a writer, not a lawyer or political scholar.  But based on all that I’ve read, there is potential big trouble ahead for 70 per cent of the American public who think the government should stay out of the decisions women make about their own bodies may be ignored.  What else is new?

In October 2017, I (Brigitte Amiri, ACLU Reproductive Freedom Project) went to court to stop the Trump administration from blocking a young immigrant from obtaining an abortion. She had crossed into the United States the month before and discovered she was pregnant soon after. She never had any doubt about what she wanted to do. But the Trump administration had other plans for her.

Her plea, which I relayed to a three-judge appeals panel, was: “Please stop delaying my decision any longer.” That panel included Judge Brett Kavanaugh, and her plea went unheeded.

With a Republican-controlled Senate, chances look good for Kavenaugh to become the next conservative justice who would tip the Supreme Court to an expected six to three right-leaning majority.  (BTW, the three liberal-leaning justices are all women.  What does that tell you?)

The invitees at the NARAL Meet and Greet in my neighborhood were excited to be part of a movement whose first goal is to defeat Kavenaugh and then to “turn” the House of Representatives in November.  (Come on, you suburban white women who may be on the fence—who may have voted for Trump but kick themselves regularly for making that choice.  We need you!)

After drink, conversation and h’ordeuvres that made for a dinner (our host tried her best to give goodie bags to even those claiming to be on a diet), the group of more than fifty settled down in lawn chairs or on their feet and listened to a rousing talk about NARAL’s goals and how to get involved.  I was ready to grab my phone, call Republican Senators who have signaled that they may not vote for Kavenaugh, and march.  I’m a child of the sixties and have marched in anti-war demonstrations (That’s the Viet Nam War), the women’s movement (No, I didn’t burn my bra), and in marches against segregation.

It is a wonderful thing to be part of something important and to do something instead of throwing a shoe at my TV or switching channels to watch “Love It Or List It” or “The Property Brothers.”

So, grab a pair of comfortable tennies, go to https://uniteforjustice2018.com/?source=naral, and sign up for the National Day of Action on August 26.  If there isn’t an event close to you, call the NARAL national headquarters in Washington, D.C., and ask what you can do.  I called and was told there WAS an event planned for Chicago where I reside and that the organizer would call me today or tomorrow. 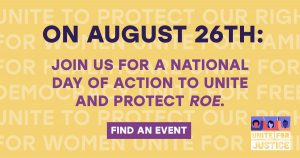