Jerry taught a fiction writing workshop that I signed up for sometime during the two years I spent as a stay-at-home mom.  Full-time parenting didn’t fill my creative spirit, and maybe writing a short story about my failing marriage might be less costly than seeing a therapist.  (I eventually saw a therapist.)

I don’t remember if that was during or after Jerry and I became lovers.

Jerry was different from my husband and from other men in my past.  (Not that I had that many.)  He was a runner before running became fashionable.  He ate all kinds of nuts and seeds and other “food” stuffs that smelled funny and tasted even worse.  I was enthralled but not converted.

Every Wednesday at 2 PM, I sat on Jerry’s front steps, waiting for him to get home from work as a probation officer.  He loved kids, knew how to talk to the most unruly and disturbed and, as a bonus, had no problems with me having a son.  (I’m already ten steps ahead and imagining him as my son’s step father.  Oh, naive me!)

When my husband and I finalized our divorce, I counted on seeing Jerry as often as possible—maybe every night.  When that didn’t happen, I put out a call to friends that I was “available.”  I met my current husband and dated both men for almost two years, until Jerry made the inevitable decision for me by kicking me to the curb.  “You son is not the problem,” he explained on his way out the door.  “It’s you.”  Ouch!  Truth was he had met another woman and was smitten.  I guess I helped him see what he didn’t want in a partner.  (In truth, I can’t blame him.  I was an inexperienced partner who had lived with just one other man, and my track record was not for the record books.)

I saw Jerry off and on during the intervening years.  He edited the 1st edition of Dead Serious, my book about teen suicide, and was my biggest cheerleader. 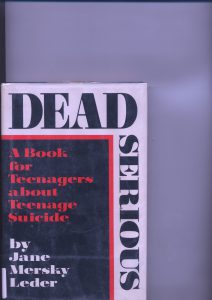 I was a student in at least two of his writers’ workshops held in his home.  The last time, his knees from all that jogging were in poor working order but, in all other ways, he was just the same.  “Women,” he said.  “She (his wife) made me go to counseling.”

With the publication of the 2nd edition of Dead Serious, it seemed only right to give him a call.  We hadn’t talked in what seemed like maybe two years.  In fact, it was more than four, and Jerry was dead.  He’d succumbed to mesothelioma, probably from exposure to all the asbestos in the walls of the houses he’d renovated.  He’d been dead for four years.

R.I.P., Jerry, even if my condolences are four years late.