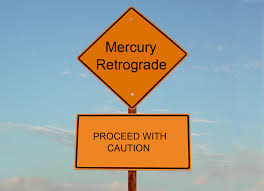 Well, Mercury is not really going in the wrong direction: the planet just appears to be.

So, who cares?  I do.  After the last week of technology going wacky, car problems, deals (my son’s) gone awry, I’m once again a believer.

Yesterday, I told my husband numerous times, “This must be a Mercury Retrograde.”

He looked at me as if I were off my rocker.  Again!  “You’re not still into that astrology stuff, are you?  I thought you dumped it years ago.”

I had.  I stopped keeping track of “my” astrologer’s readings that I’d carefully noted on my calendar.  It seemed more trouble than it was worth and more than 50% accurate but . . . I’d given up on “readings” of all kinds, though my session with Robert The Reader that I wrote about in Psychology Today and blogged about on April 12, 2018, has stuck with me all these years.  (Check it out.)

The origin of observing cosmic phenomena goes back thousands of years, when people thought the cosmos revolved around the Earth, long before Google and Neil deGrasse Tyson. But Mercury never actually “retrogrades.”

It’s just an illusion caused by the rotation of the Earth, like passing a local train that appears to be going backwards because you’re on an express train, moving so quickly past it.

The last time a planet had any effect on us, Helfand says, is when a chunk of rock that would eventually become Mars crashed into Earth and created the moon 4.5 billion years ago.

Written by two diehard skeptics who do have a lot of scientific support on their side.

I say, science be damned; at least, in this case.  (Don’t get me started on climate change deniers.)

So, Mercury Retrograde officially began on July 26 of this year and runs to August 19.  Whew!  Less than a week to go!

This is how my life has been turned upside down:

Okay, by now, I was convinced that we were under the spell of a Mercury Retrograde and that our best tactic would be to burrow into a cave until the damn planet stopped looking like it was going backward. 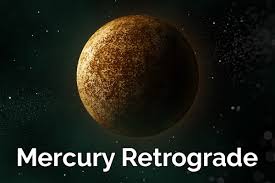 Sure, all of this could have taken place at any time.  And I’m sure all those scientists out there who study this stuff would tell me that it was just a matter of bad luck.  They can have their research to back them up.  I’ll stick with my nemesis Mercury that goes backward four times a year.