Okay, so the Fab Four were singing about love.  But I’m writing about Extra Sensory Perception that comes in many flavors: readers, astrologers, palmists, channelers . . . Go ahead and add to the list.

To tell the truth, I was a skeptic.  Some of the supposed people with a “gift” got some things right about me and some things wrong.  You know, the standard stuff like there is a true love in your life or about to be.  Or you’re going on a trip within the next year.  (How many miles from home?) Or there is something about your health that may be a cause of worry.  Maybe their predictions were right some of the time, but they were so wide and vague that they fit just about everyone.

Sure, I kept testing the waters.  A tarot card reader at the neighborhood fair.  An astrologist who came highly recommended.  (I kept notes on my calendar and found myself twisting my life to fit her predictions).

But then there was Robert, Robert the Reader.  I was on assignment for a now defunct national women’s magazine to write a feature about ESP.  My assignment was to schedule sessions with all kinds of people who claimed higher powers.  Robert had come recommended as the “real deal.”  So, off I went.

Robert followed a process: he would ask you a question, write down your answer on a piece of paper, and turn that paper upside down on a coffee table that separated him and his client.

He didn’t waste any time.  “On what day will your life change?”

“You mean what day out of three hundred and sixty-five?”

He turned over the pad of paper.  He’d written may 15, with May 23 in parentheses.  “You think it will be May fifteenth, but it will be the twenty-third.”

I was impressed but not convinced.  It could have been a lucky guess.

“What’s the name of your next book?”  I shivered.  How did he know I was writing a book?  There was no Internet.  He couldn’t google my name.  There had been no pre-publication PR.  And he didn’t know a soul connected to me.  The only two people on the planet who knew the title were my editor and husband.

He turned the paper over.  It read Dead Serious.

Okay, so he’d made another good guess, but I began to feel uneasy.  I wasn’t enthusiastic about continuing to play this game.

“Why have you been waking up in the middle of the night?”  Was it so obvious?  Were there dark bags under my eyes?  Was my hair askew?  Had I smeared my lipstick?

Now I was really spooked.  I had been waking up for no apparent reason.  Everyone had a bout on insomnia once in a while.

He wrote once again and, suddenly I knew why I’d been waking up in the middle of the night for over a month.  The only remedy was a script for Ambien, a drug that physicians at the time didn’t realize how addictive it was.

“My dead brother is trying to contact me.”  I was sure he had no idea about my brother or his suicide or the reason I was writing Dead Serious.

I held my breath.  He turned the paper over.  It read: “Your dead brother Rob is trying to contact you.”

How the hell did he know that?  My brother’s name was Robert, we called him Robin.  Rob was close enough.” 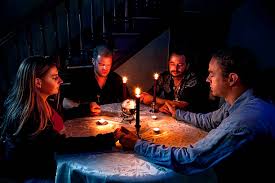 This was more than thirty years ago.  Sure, I’d read about seances and seen actors in movies with their Oui·ja boards boards, but the whole thing seemed like a ruse.  All this talk about spirits hanging around a house where it once lived or the ability to “know” what a dead person was thinking (“Your husband loves you very much and is so sorry that he left you with little money”) seemed like a crafty way for folks to believe in something/someone they could not in their everyday lives comprehend.

But this Robert guy.  He scared the hell out of me.  What was I supposed to do?  Sit up in bed in the middle of the night and talk to my brother?

I was freaked.  Robert was not a sham.   “You know,” he said, “this ‘gift’ I have is a curse.  I see someone walking down the street and know that they will die in an automobile accident.  Or that they’ll battle caner or lose a loved one.  It’s exhausting.”

I felt sorry for him and didn’t know what else he “saw” about me and my future.

But to his credit, he set me on a path to break my addiction to sleeping pills and to eventually talk to my dead brother when he appeared in my room.  Robert set me on the path to healing and, for that, I am ever grateful.