I’m always amazed that a few times every year, I dream about the boy I loved more than five decades ago and how he broke my heart when he dumped me for that Carole girl who, I had to admit, was quite a catch. She was petite (a description that sure as hell didn’t fit me), cute, and, based on the rumors, “fast” and “loose.” (Seeing my ex with an open fly on prom night pretty much confirmed those rumors.)

D. and I did get back together more than a year later, but, by then, the emotional hit had burrowed itself deep into my psyche. I’m 73 now, but that rejection seems to have outweighed being kicked out of the National Honor Society, not getting in to Cornell, receiving a pile of rejection letters from editors and publishers.

So, what’s up with that?

I googled “Teens and Breakups” and got much more than I’d bargained for. Here are some of the articles/books/research studies referenced on Page 1:

“The Effects of Teenage Breakups”

“Teen Break Ups: What Parents Can Do for Their Teenagers”

(I was already confused. Is it break up or breakup? If the writers couldn’t get on the same page, how was I going to begin to understand how the breakup [BTW: one word] had an everlasting effect?)

“Breakups are the leading cause of suicide among teens”

(Oh, brother. I thought I’d left the whole teen suicide issue behind after publishing Dead Serious: Breaking The Cycle of Teen Suicide. Besides, there is no such animal as a “leading” cause of suicide. Note to myself: Don’t bother reading this article.)

“Teenage Breakups Hurt. How To Help When A Relationship Ends”

This one was written for parents and offered a few tips–tips my parents (read my mother) should have read.

Number 1: Do not minimize what has happened.

Hah! My mom bombed out on that one big time. Her “Everything works out for the best” philosophy was all I needed to dislike her (Is hate too strong of a word?) intensely and to never trust here fully again–at least, not until I was off to college.

Number 2: Allow them to be self-indulgent.

Okay, so I have a little Sarah Bernhardt . . . well, maybe, a lot of the Drama Queen in me.

But I wasn’t playing to the crowd on this one. I was sure that no one else on the planet–in the galaxy–had ever been in so much emotional pain. Again, my mother pulled a no-no by telling me about the time when her boyfriend what’s-his-name broke up with her and how, with time, she not only survived but met her husband-to-be, my father.

“Teenage breakups need to be grieved—just like any other loss.”

For what?To confide in a therapist that you were having sex? That you had given your body and soul to a boy who had tossed you away like a used condom? (Oh, he didn’t use a condom. Well, then the saga is even more compelling.) No, talking to a professional was out of the question.

Number 4: Encourage your teen to be patient

Patient? Whoever wrote that must never been kicked to the curb by the guy she loved more than anyone else. Ever.

They say for every boy and girl

There’s just one love in this whole world

I’m happily married (most of the time), have a wonderful son, and love my work. Still, maybe it’s those times when the realities of daily living punch me in the gut that I dream of D., how I loved him so, and how he broke my heart. I guess there are some things we never move past.8 views

The weather in Chicago made even the most optimistic of souls cranky, tired and ready to move to Tahiti.  Full disclosure: I detest winter: the cold, the dark, short days.  Around October (sometimes, earlier) I start fretting about what’s to come.  I try my best to enjoy the day I’m in, but it can be a tall order.

This year was no different.  Earlier than usual–around the end of November–my seasonal affective depression began to kick in.  I found myself wanting to hit the sack no later than 9:30 and had to push myself to stay awake any longer.  My energy level sank like the Titanic.  The walls were closing in, and that there was no escape.  In truth, the only thing that prevented me from doing or saying something I’d come to regret was the fact that my husband and I had sixty-five days and counting before beating a path to Mexico for two months.

Yes, I hear you:  What the heck is she complaining about?   She has a get-out-of-jail card.  Lucky her.  If I had her problems (as my dear father used to say), I’d be taking golf lessons.

I understand.  I really do.  But I’ve worked hard to have the flexibility and, yes, hard earned money to get the hell out of Dodge.

Here it is a matter of days before Xmas, and there is not a snowflake of snow on the ground.  The sun is doing its hide-and-seek game of flirting with light and then cruelly thrusting us back into gray.

That was not the case a few weeks back.  There was no in and out.  Only out.  I meditated on being a bear, warm and toasty in my lair of hibernation.  Not a chance.  I was destined to complain and, oh, yes, suffer.

I had to get away.  My husband and I did our due diligence and researched cheap flights to somewhere warm.  Top two cities on the list: Tuscon and Miami.  The former sounded like a cultural wasteland; the latter had been a yearly stomping ground for years when my parents lived in Florida.  Since they’ve passed away, we have not returned.

“How about New Orleans?  Let’s check the weather there.”

Not exactly the Caribbean but warm and sunny enough.  (Besides, I haven’t worn a bathing suit in maybe five years.)

Yep, let’s skip town and head to the Big Easy.

We slam dunked a round-trip fare that normally would get us from Chicago to Detroit.  Booked a fairly inexpensive guest house.  Packed light jackets and a sweater or two.  Who needs layers in sunny, 60+ degree weather?

We did!  “Oh, you should have been here last week end,” they said.

Little consolation.  We froze our butts off and, aside from one somewhat sunny day, endured chill and rain.  (We did take umbrellas.)  Still, a getaway to warmer climes it was not.  In some ways, it was even more depressing than in Chicago where friends didn’t hesitate to tell us that the sun had not stopped shining.

Is there a lesson here somewhere?  Do we begin to realize that the grass is not always . . . Oh, crap!  I hope that’s not the takeaway.   Are the gods admonishing us for not sticking it out come rain or shine.  (Oh, brother.)  Or love the one you’re with?  I don’t know: nothing clicks.

The good news?  It’s sunny and warm enough with lots of layers to take a few steps outside.  I’m going for a walk.

The countdown has begun.  Actually, it began the day after the summer solstice when sun worshipers like me celebrated the longest day of the year and then, with a gut punch, realized that it was all downhill from there. 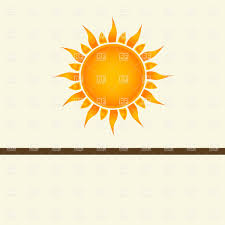 Now, I’m not talking about the Miami Beach-style sun worshiper who slathers her body with sun lotion, lugs her beach chair next to the pool, and sizzles like bacon until the sun dives down behind the high-rise apartments that line Collins Avenue.

No, I’m talking about the worshiper who wakes up in the morning as the sun begins to burn a slice of empty space under a closed bedroom window shade—who revels in the promise of unlimited possibilities and the boundless energy to follow one’s fancy wherever it may lead.

There are “only” nineteen shopping days until Christmas and FIFTEEN days left until the winter solstice— the shortest, often darkest day of the year. 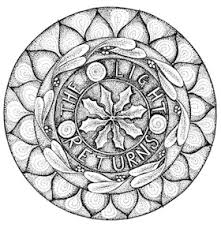 Okay, I can hear some of you out there mumbling about how I shouldn’t be so focused on the outer world at a time ready-made for exploring the depths of my inner world—a world rumored to be rich with golden nuggets waiting to be mined.  (In fact, my yoga teacher basically pitched me this line last night.  I patted her on the back, said I expected said response but that, as far as I was concerned, it was a bunch of  bull—-.)  I have plenty of time on my hands when the sun shines to dive into my thoughts.

I don’t know where you live but, here in the Chicago area, we haven’t seen the sun for more than a total of twenty minutes in over a week.  I wilt a bit more each day.  With a modicum of hope, I check the weather on my iPad every morning and, to date, all I see are symbols for clouds, maybe even little snowflake icons.  And it’s only the beginning of December!

Hence, the countdown until the winter solstice and the subsequent increase in daytime hours.  Apparently, I’m not the only one who celebrates the Big Day.  Check out the Time article.  It’s a stitch.  People do some crazy stuff that day.  “In Japan, people traditionally soak in hot baths with the yuzu citrus fruit to welcome the winter solstice and protect their bodies from the common cold.”  Thousands visit England’s famous Stonehenge to “sing, dance, play instruments, kiss the stones and do yoga as they wait for the sun to rise.” 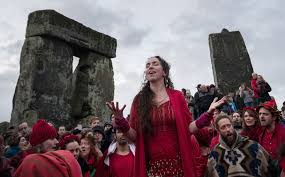 Maybe I’ll reenact my own Stonehenge.  Dance around the frozen grass and crumpled leaves in what was only two months ago a bouquet of fall colors.  Bundle up and head to Lake Michigan, stand on the rocks and do a few sun salutations.  Sneak over to my neighbor’s hot tub, pull off the cover and jump in.

Hail to the end of the descent and the beginning, albeit a crawl, of longer, sunnier days.